Nowadays, more and more people are aware that the 'traditional funeral' is just one of many possible funeral options available to them. And with more people than ever taking the progressive decision to plan their funeral years ahead, there's a clear trend away from black clothes, black cars and traditional coffins. There's also much more likelihood that they'll be opting for a non-religious or humanist funeral and alternative burial instead. Indeed, even the name of the ceremony is changing as people increasingly opt for a 'celebration of life' or a 'thanksgiving' instead of a conventional religious or secular funeral.

What's more, with many people choosing not to live according to religious principles, or to hold accepted views on life and death, there's increasing demand for the humanist funeral with its focus on the life of the deceased rather than a passing to an 'afterlife'.

You're not alone if you think there are strict legal constraints on the format and procedure for your funeral. Though many people still think they can't deviate from a 'standard funeral procedure', this simply isn't true:

You do not actually have to hold a funeral ceremony

You aren't legally required to have a specific type of ceremony

Licensed buildings aren't required (except for Anglican services in England)

Burial is allowed on private land with the landowner's permission

You needn't have a traditional pine coffin

And if, as many people do, you have strong environmental concerns, the latest alternative funeral ideas offer all sorts of 'green' possibilities for a religious or non religious funeral service. Even the range of burial containers has increased, with biodegradable shrouds, wicker coffins and bamboo caskets now readily available and more than 200 woodland burial sites currently operating in the UK. 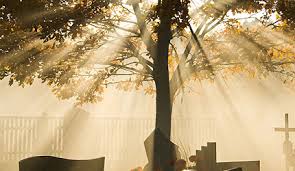 A humanist funeral or memorial ceremony is much more appropriate for people who chose to live without religious principles and without holding accepted views about life and death. With a non religious funeral, there's no preoccupation with the 'afterlife' that is an intrinsic part of other beliefs. Instead, the ceremony allows family and friends to concentrate on a joyous celebration of a life well lived and the connections made during the deceased's life.

Typically led by a humanist celebrant, a humanist funeral service contains nothing that should cause offense to anyone with religious beliefs. Instead, the ceremony is a heartfelt celebration of the deceased's life and a marvellous opportunity for loved ones to share their experience and express their feelings in a positive way.

According to Pagan belief, birth, growth, death, and rebirth form a cycle that determines the underlying order of the universe. Because there are no universally accepted rites or traditions to unify different forms of paganism, it's very difficult to find a 'standard' order of ceremony for a pagan funeral. There are, however, many resources on the internet and the general consensus of online opinion seems to be that the following stages should be present:

For further information, you might find it useful to research on the internet or obtain a copy of the following publication, which, at the time of writing, appears to be one of the main published guides to Pagan burial and funeral services:

The Pagan Book of Living and Dying: Practical Rituals, Prayers, Blessings and Meditations on Crossing Over by 'Starhawk'. 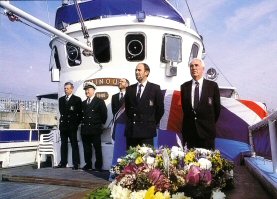 Sea burial, an alternative to traditional or alternative land burial or cremation, offers another way for a person to return their body to nature and continue the unending circle of life.

Be warned, however, that sea burials are among the most complicated of alternative funeral services to arrange in the UK. They're not cheap either, with a typical sea burial costing up to £3,000 plus boat hire and other associated costs.

Several important steps must be taken before a sea burial can take place. These include:

Most of the information below can also be found by clicking on the following link for the government department responsible, called the Marine Management Organisation.

Alternatively contact Britannia Shipping at www.burialatsea.co.uk who are one of the few companies offering such a service.